Reducing the amount of plastic we use, spending less time in the shower, swapping fast fashion with second-hand; these are but some of the things we’re advised on to combat concerns surrounding the future of the planet. Due to the Earth’s negative reaction to rising levels of carbon dioxide, methane, and other greenhouse gases, it is imperative that the global community implements effective measures to negate the growing pressure on our planet’s resources. The Paris Agreement, a treaty signed by 190 countries (as of 2021) to limit global temperatures rising, is an important step in the right direction but the topic of environment conservation has been on the grapevine for many years. Celebrated every year on 22nd April, the origins of “Earth Day” were established by a tale of ecological disaster. In 1969, a devastating oil spill in California prompted Senator Gaylord Nelson to intercede against the damages rendered by Industrialisation, and thus, the counterculture movement ,Earth Day, was born to educate and rally the population to protect Mother Earth. The movement has established itself on the world stage, followed in 141 countries, highlighting the ecological issue to over 200 million people.

Both established and up-and-coming brands in the automotive industry have committed to sustainability plans, the rising consumer demands’ leading to an increased output of electric vehicles (EV). To celebrate the 52nd anniversary of Earth Day, Pocket Box looks at the history of EVs and how they have developed through time. 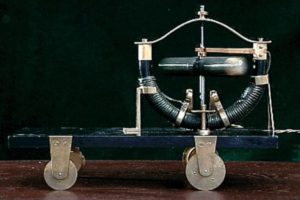 Contrary to popular belief, the inception of electric vehicles came about in the 19th century, pre-dating the invention of Internal Combustion Engine (ICE) vehicles, the petrol model which became the mainstream vehicle of the 20th Century. While it is disputed, it is thought to be Hungarian experimentalist, Ányos Jedlik, who kickstarted the electrification of mobility. Jedlik was obsessed with the power of electricity and its ability to simplify life for humans, and so in 1828, created an electromagnetic device and attached it to a model car, which he also designed, and is still functioning to this day. 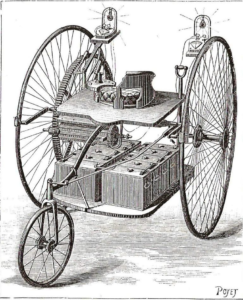 Jedlik’s innovation led the way for the development of more sophisticated models of electric vehicles throughout the 19th century. Not long after, the Scotsman, Robert Anderson, developed the first full-sized electric vehicle in 1832. Removing the horse (obviously), Anderson strapped a crude oil powered battery under a carriage, enabling his pioneering locomotive to pick up speeds of up to 12 km/h. Moreover, Anderson’s idea was tweaked by French inventor, Gustave Trouvé, who in 1880, attached a several rechargeable lead batteries to a tricycle and cruised round the streets of Paris at an average of 18 km/h, with a range of approximately 25 kilometres.

While their usage wasn’t widespread, statistics show that roughly 38% of vehicles were electrified within the U.S.; 40% were steam engines and just 28% were petrol. However, the popularity of EVs in the late 19th and early 20th century began to dwindle due to two things; Henry Ford and the discovery of oil. While oil wasn’t a new item on the market, the discovery of oil reserves in America cheapened the cost of petrol and made petrol-powered vehicles more affordable for the everyday household. Combining this with the introduction of Henry Ford’s efficient production line for the Ford Model T, allowing for the world’s first affordable vehicle, and the dream powering EVs needed to be recharged. Fast forward and ICE vehicles dominated the automotive market for the majority of the 20th century. That was until just before the turn of the millennium when Toyota introduced and mass produced the Toyota Prius in 1997, marketing it as the world’s first hybrid EV when it hit global markets in 2000. The “rEVolution” as we know it today began in 2003 when Martin Eberhand and Marc Tarpenning saw an opportunity; they took it. Tesla Motors was founded and they began working on developing vehicles powered by lithium-ion batteries. Upon seeing the success of Tesla, nearly every established motoring company hopped on the electrification wagon and now, most have committed to sustainability for the future.

As governments around the world commit to tackle climate change, the adoption of electric vehicles looks to increase. The U.K. government’s commitment to cease the sale of ICE vehicles by 2030 was followed by numerous companies including Mercedes, Honda and Land Rover. Moreover, by the turn of the next decade, the International Energy Agency (IEA) predicted that electric vehicles will account for 7% of the global vehicle fleet, roughly 145 million on the roads.

As the world becomes more educated about the harmful effects of our current system of motoring, the future of automobility and the atmosphere looks to go green.