The competitive automotive industry; with 14 major car corporations owning up to 60 global auto brands including the likes of Volkswagen, Ford and BMW, looks set to become increasingly more competitive due to the rise of global demands for the reduction of CO2 and greenhouse gas emissions. With the climate crisis remaining at the forefront of governmental thought, the vehicular supply and demand chain looks set to be dictated by the electrification of transport. Planned initiatives by both the U.K. and U.S. governments to reduce the number of combustion-engine vehicles in use by 2030 and 2035, respectively, rousing car manufacturers look to get ahead of their competitors.

Bentley made an announcement that they would be an ‘EV-only’ brand by 2030 while the Renault Nissan Mitsubishi Alliance pumped approximately $26 billion into a roadmap which details their goals to develop 35 new EV models by the same year. While Tesla remains the undisputed leader in the world of vehicular sustainability, Tech conglomerates seek to steal their market share with developments being made by Apple, Microsoft and Sony to enter the automotive business.

Microsoft, along with Virgin, are already on their way in establishing themselves within the self-driving industry in 2022, with investments made in Wayve, a U.K. based autonomous vehicle start-up company attempting to design autonomous driving technology through the medium of AI. Microsoft are not industry newcomers, however, with a partnership arranged between the company and Volkswagen back in 2021 to build a dedicated cloud-based platform specifically created for future autonomous car systems. 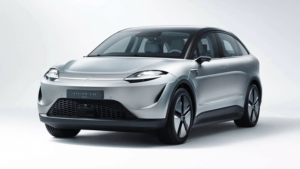 Meanwhile, the likes of Apple and Sony look to go one step further than their counterparts at Microsoft with potential designs of a branded vehicle in development by both corporations. Apple, and their ‘iCar’ project, codenamed ‘Titan’, has been shrouded in secrecy since its revelation back in 2018. It is reported that there is uncertainty about whether Apple intends to release a new car design, which “would give Tesla a run for their money”, or if they are designing autonomous driving software similar to Microsoft’s involvement with Volkswagen.

There is more information surrounding Sony’s mission for domestic domination, as they seek to establish themselves in both your living room and your driveway. The Playstation giants launched their EV branch, Sony Mobility, at the unveiling of the Vision-S 02 at CES 2022, the SUV equivalent of the Vision-S saloon model disclosed back in 2020. Sony chairman, Kenichiro Yoshida, confirms this vision for the future of mobility and states the project “has been developed on a foundation of safety, adaptability and entertainment”. Despite there being no confirmed release date, if developments continue, not only will future owners of Sony vehicles be able to drive safely without human intervention, their PS5 will be road-worthy too!