As February freezes it’s way out of 2022, Spring approaches and it seems like the weary  world is re-emerging from the chrysalis of Covid’s cocoon. With pandemic restrictions easing globally, “normal” life resumes, and those of us that have been mentally sitting on an aeroplane going anywhere for the last few years will be rushing online to get the cheapest tickets out of here, swimming trunks and flip flops in tow. Pocket Box urges you to reconsider! Staycations were the tourist craze of the pandemic for obvious reasons but we shouldn’t be so quick to ditch them, now that flying is a viable option again! With approximately 15,000 km of road to explore, coastlines awash with ancient history and scattering natural wonders, this island provides stunning world renowned routes which entirely encapsulates the essence of the Emerald Isle for the 11.3 million people flocking to our shores annually.

As the title would suggest, this is a list of our picks for the top five most scenic routes in Ireland, so, of course there will be some bias but feel free to add any personal favourites that were missed! Make sure you have your rain jacket packed, seat belt on and Google Maps ready as we take to the road, agus fáilte go hÉirinn! (and welcome to Ireland!) 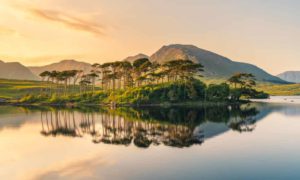 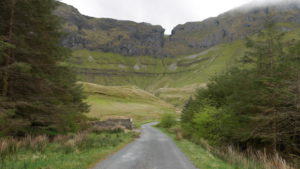 Located in the dramatic Dartry Mountains just off Ireland’s Wild Atlantic Way, which so happens to be one of the world’s longest guided coastal routes with 2600 km of road to get lost on. It takes about half an hour to drive from the town of Sligo to the natural wonder that is the Gleniff Horseshoe Drive in County Sligo, also known as ‘Yeats Country’, in honour of the Irish Nobel Prize winner, who found this the area of inspiration for his literary works. Once you’re there, it’s easy to see why. 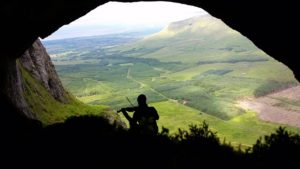 The 10 km drive itself is a relatively short one which will take 30 minutes and can be enjoyed at a slower pace on foot, completing it within 3 hours if done at a leisurely speed. At the top of the route, you can catch glimpses of awe-inspiring views of the glacial valley you just came up, winding roads nestled just between the mountain and the vast Atlantic ocean in Donegal Bay below. The valley itself was carved out of the mountain during the last Ice Age, occurring over 10,000 years ago, and providing those brave enough with the opportunity to hike up to Ireland’s highest cave, at 400m above sea level, named Grainne and Diarmuid’s cave. The cave name aptly took its name from Irish mythology, where it is said that the princess Grainne and her lover, Diarmuid, took refuge in the cave as Fiann Mac Cumhaill (Finn McCool), the legendarily infamous Irish warrior, hunted them down in murderous jealousy due to his failed attempts to marry Grainne.

When you finish the short drive, natural hotspots like that of Benbulbin, the Devil’s Chimney and Glencar Waterfall are all within the vicinity so you can continue savouring the epic views that few places in the world can provide.

Situated in the province of Munster in the ancient South West of Ireland, the Ring of Kerry is considered as the gem in crown of the Kingdom of County Kerry. Winding through the Iveragh Peninsula, this 179 km route is highly popular amongst tourists due to its jaw droppingly dramatic sea cliff views and rambling greenery dominating the entirety of the route. 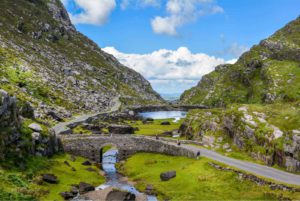 Even in Summer months, pray for a good day when you go, otherwise prepare to be battered by caustic weather conditions travelling across the Atlantic, a common feature of the Wild Atlantic Way and which the erosion enabled by it can be attributed to the stunning coastal views Ireland has to offer. As you can imagine, there are a fair few unmissable landmarks along the 179 km road and it is advised to travel the Ring of Kerry over 2 to 3 days to really appreciate some of its natural treasures.

Unwind through the winding roads of Killarney national park, taking in the vast mountainous landscape including Ireland highest mountain, Carrauntoohil. The Gap of Dunloe presents itself as a postcard perfect view for visitors. Maybe stop for some tea and biscuits in the colourfully quaint fishing village of Kenmare. The Ring of Kerry is a route that words do no justice for.

The Mourne coastal route plays host to some of Ireland’s most spectacular scenery. Ranging roughly 165 km of unadulterated beautiful coastline, the Mourne coastal route centres around the drives’ unmissable masterpiece, the glorious Mourne mountain range, which is home to Northern Ireland’s highest mountain, Slieve Donard standing at 850 metres tall (Fun Fact: ‘Slieve’ is a derivation of the Irish word for mountain). If you decide to swap your tires for hiking boots, you may get lucky and see the Isle of Man in the horizon as you summit Ireland’s 7th highest mountain. 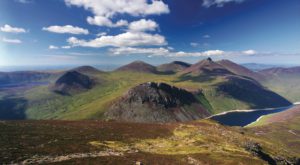 The attractions of the Mourne coastal route are boundless; take a dip in the Irish Sea on one of the many beaches along the route, Murlough Bay being the highlight of the lot, its fascinating ecosystem teaming with life within the sand dunes. With the shadow of Slieve Donard domineering over, pop into the enjoyable ‘wee’ town of Newcastle for the amusements, finishing off with a fish and chip and ice cream along the pretty promenade. You’ll notice several castles and forts dotted along the route, namely Anglo-Norman defences in the conquest for Ulster between the 12th and 16th Century, like that of Dundrum Castle or Narrow Water castle near Warrenpoint. 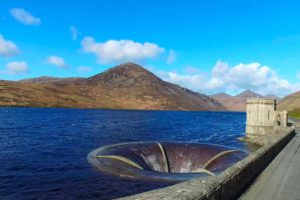 Finally, transport yourself into the impressive mountains as you motor through the meandering mountainous passage through the Silent Valley reservoir, home of Spelga Dam, which is one of the largest suppliers of energy in the country and a magnificent sight to behold, laying amongst the looming Mourne mountains. 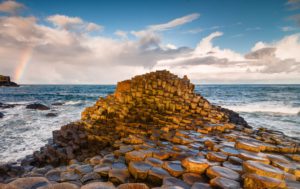 The Causeway coastal route spans a massive 313 km route which carries you through the coastal regions of the north of Ireland, traversing through counties Antrim and finishing in County Derry. It is estimated that a visitor would need to take 4 to 5 days to properly visit all the main attractions along the route; which include castles, waterfalls and the world famous Giant’s Causeway.

This wouldn’t be a road trip guide without a history lesson of the attraction which is visited by 1 million people a year on average, the story of the Giant’s Causeway is one shrouded in Irish mysticism. Despite being a normal warrior, Finn McCool is immortalised as a giant in the legend of the formation of the Giant’s Causeway, where story goes that it is a result of a fight between Finn and his Scottish giant counterpart, Benandonner, who is seen as a threat to Ireland. Finn retaliated by tearing up great chunks of the Antrim coastline and hurling them into the sea. The newly-created path – the Giant’s Causeway – paved a route over the sea for Finn to reach Benandonner. However, realising that his opponent was much larger than him, Finn retreats to Ireland and is disguised as a baby by his quick-thinking wife. When Benandonner arrives, he sees Finn disguised as a baby and realises that if a mere baby is that big, the father must be far larger! Following this realisation, Benandonner rushes back to Scotland, destroying as much of the Causeway as he can in his haste to put as much distance between Ireland and himself as possible, and thus, the myth of the Giant’s Causeway was born. The actual scientific reason for the formation of the Giant’s Causeway is equally as fascinating as the mythology of it. Formed over 60 million years ago, the perfect basalt hexagons are a result of volcanic activity in the area in which, over time, lava cooled and solidified into 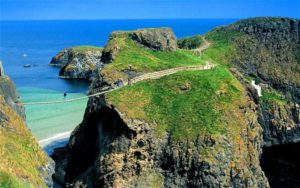 40,000 perfectly shaped hexagonal columns, making it the world famous site of natural beauty that it is known for today.

Moving away from the main attraction on the Causeway coastal route, visitors can enjoy spectacular coastal scenery and beaches. For adrenaline junkies, why not try the Carrick-a-rede rope bridge, one with a 30 foot drop below, erected by fishermen 250 years ago. Or maybe you’re the world’s biggest Game of Thrones fan? If that’s the case, you’ll get a thrill out of seeing iconic landmarks like the Dark Hedges or Cushendun Caves. Why not pick up a golf club and aspire to be like the professionals who have previously flocked to world class golf courses along the coast? Like that of the Royal Portrush Golf Club which played host to one of golf’s biggest events, The Open, in 2019.

Whether you are a nature lover, a TV Buff, or a putting fanatic, the Causeway coastal route will likely have something to do for everyone! 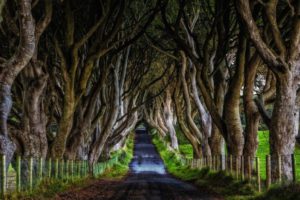 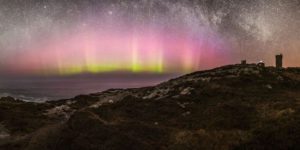 The first thing that you will notice when you reach the Inishowen Peninsula is the rich, alluring smell of freshly-dug peat along the 100 mile (160 km) scenic route, formally known as the Inishowen 100. Stretching along the North East of County Donegal, the Inishowen 100 presents a plethora of scenic views, and if you are lucky enough, you might spot Aurora Borealis, better known as the Northern Lights, which is the area it is most sighted in Ireland.

Donegal is strangely nicknamed ‘The Forgotten County’. Strange because when you go, there is very little you will forget. You can start the route on the edge of Europe’s Western frontier and at Ireland’s most northerly point, Malin Head, with its wildly rugged coastal cliffs inspiring film moguls to shoot scenes among its 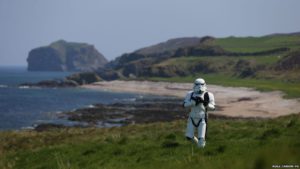 dramatic backdrop, including films like Stars Wars: The Last Jedi and The Northman. Malin Head also was a key military post, specifically during World War 2, where a large ground marker reading ’80 EIRE’ can be seen in large letters to signify to overflying planes that they were in Irish territory and to also remind them of the country’s neutrality in the war.

Make your way down the route to outside the city of Derry to the archaic fort of Grianan of Aileach, an ancient hillfort dating back to 1700 BC. In Irish mythology and folklore, the ringfort is said to have been originally built by the Dagda, a god and the celebrated king of the Tuatha Dé Danann. The fort was erected around the grave of his son, Aedh, who had been killed through jealousy by Corrgenn, a Connacht chieftain. Don’t miss out on the wealth of spectacular blue flag beaches in the area; Five Finger Strand, Dunree Head or Lisfannon beach to name a few! The outstanding natural beauty, a deep and proud history, along with the friendliest of locals to help you out, Inishowen 100 represents the ultimate destination to get lost in Ireland’s awesome allurements! 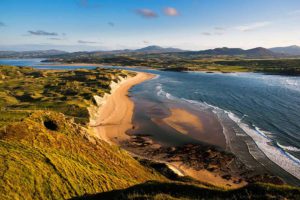 While there is nothing like stepping off a plane into a tropical paradise or getting lost in an endless metropolis, we hope our list has reminded us that good old Eire has a gem or two across all the corners of her lands!

Pocket Box would like to remind everyone of our useful car maintenance services as The Free Car App on the market. Never worry again about remembering any upcoming MOT, Insurance and Tax due, we’ll send you friendly reminders when the time is right! Leave it with us and get more time planning the best Irish road trip your tyres will take you!